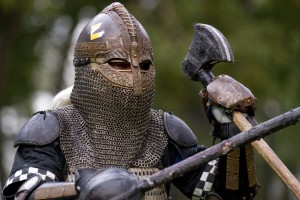 This fun and energetic college essay shows off the student’s unique voice, perspective and experience. He tells an engaging story while giving a sense of his personality and intelligence.

“Dare you doubt me? I will send you to Valhalla for your insolence!” Beowulf thundered.

“Uh… okay then. Um, so uh, when was the last time you uh, saw the monster?” The prosecutor stuttered.

I smiled to myself, but the character of Beowulf stayed locked in a stony scowl. That moment of shock was what I had prepared for. I’d rehearsed, researched, and fallen into character. I settled back, comfortable at the center of this mock trial in my junior year English class.

It was then that I REALLY appreciated the SCA. The Society for Creative Anachronism is dedicated to recreating medieval history.

Translation: a bunch of Shakespeare/Lord of the Rings geeks get together in a hayfield somewhere to play dress up. Equestrian events (á la, “Knight’s Tale”), armored fighting (á la, any bad fantasy movie), and bickering over which fabric weave is more “period accurate” ensue.

My parents have been involved since the 80’s, and I’ve been going to SCA events with them for my entire life. Every event is dusty, hot, and smells like kerosene and canvas. I love it, especially the fighting. Getting geared up so I can hit people with sticks, huzzah!

As there are not very many people my age in SCA, I spend lots of time pretending to be an adult. I can sew costumes, make armor, and talk like 40 year old engineers. While lots of these weekends were more than a little bit boring, 17 years dressed as Hamlet recreating ye olden days was the best possible preparation to be Beowulf.

The SCA has a strong bardic tradition. Many will crowd around one person, illuminated by firelight, spinning stories and songs, verses and rhymes. These stories were meant to be heard and spoken, not read from books. You have to be able to feel the intensity of the words to understand Beowulf.

When everyone else in my English class was reading and bored, I heard the bards’ powerful voice, drawing me in, weaving line after line of poetry.

I was still seated, and the room was still. Nobody expected the quiet kid who liked history to burst forth with a warrior’s fury. Least of all the “prosecutor.” Standing before a Danish prince, in full Norse costume and finery, he swallowed and continued asking questions. Most were answered with angry yelling, decrying “petty justice” or boasting about Beowulf’s deeds.

I’ve never associated reading aloud with boring. For me, it’s always been about the performance, the entertainment. It’s about making small changes in body language to be larger, louder, grander—to become a warrior prince. I’ve always been able to project emotion and entertain people. And that’s exactly what I did.

I stood up, and sheepishly smiled at an applauding audience. Even Mrs. Merrell congratulated me on the performance. All the reading, rehearsing, and scowling into a mirror had paid off. I slipped out of costume and out of character quickly, but spent the rest of the day with a goofy grin plastered across my face, smiling at anyone who’d witnessed the mighty Beowulf.